A new Eien no Aselia Drama CD is set to be realeased january the 28th! It seems to be set after Seinarukana.
http://www.xuse.co.jp/product/etc/ase_cd.html 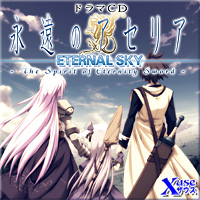 Maybe the Eternity Sword series isn't as dead as we thought.
Top

Can someone translate that for me? I know hiragana, katakana and some kanji but that will take ages for me to translate on my own.
Top

that's the best I can do for the first 2 lines.
Top

I highly recommend Rikaichan, it works wonders for dealing with kanji on webpages, although it helps to have some grammatical knowledge too.

The rest of the lines would be something like:

Eating meals, playing with animals while taking walks across hills overlooking the sea...

Although frivolous, this was truly a scene of an intimate, happy family.

At this time, an unknown Eternal came to visit Euphoria.
So, this must be the leader of the Chaos Eternals, Rogas of "Fate".

With Rogas's appearance, the Eternal family members each stand at a crossroads...
Top

No one answered? Then I will. A drama CD is a sound story. Meaning that this drama CD may give us an answer as to what the hell happened at the end of the second game with Euphoria.
Top

Ahh, I see, thank you for explaining it to me.
Top

Bought it. The comedy is great.

I lol'd when Rogas "proposed" to Euphoria and Yuuto was like, "Wisdom, Lets kill this guy!" Aselia was moe as always.
Top

beato wrote:Bought it. The comedy is great.

I lol'd when Rogas "proposed" to Euphoria and Yuuto was like, "Wisdom, Lets kill this guy!" Aselia was moe as always.

Can you post a summary for those unable to understand japanese?
Top

The end is pretty 18+ so I doubt he will